Hundreds of demonstrators have rioted outside the US embassy in Mexico City, in the latest protest against President George W Bush's tour of Latin America. Violent protests broke out as he visited Mexico, with demonstrators throwing concrete blocks at his hotel, smashing up a nearby town hall and battling riot police outside the US embassy.
Tuesday's disturbances in Mexico City were only the latest clashes during the president's week-long tour.

Protesters burned US flags and threw stones at police guarding the building.

Tear gas was used to disperse the crowds. Several people were injured, including a number of police officers.

The US president has visited Brazil, Uruguay, Colombia and Guatemala. Mexico is the final stop on his seven-day tour of the region. 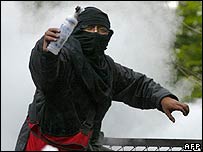 Many people were protesting against the war in Iraq.

Several protesters were arrested or injured, one with blood pouring from his head, as they dispersed.

Guadalupe Fernandez, 64, who was protesting but not involved in the violence, said they were "in disagreement with the war policy" of Bush.

He said: "Bush is desperate because is moving toward the left."

Lorenzo Fernandez, the commanding officer at the scene, said the police were only defending themselves.

The officer said: "These are people who don't know how to demonstrate pacifically."

In the city of , a Mexican radio journalist at a protest was hit with a slab of concrete and taken to hospital.

About 30 protesters also ran into 's central square, smashing windows of the town hall and spraying graffiti on the walls. Hundreds of riot place chased them out, arresting several demonstrators.

During the tour, leaders of , and all pressed Bush to work to relax immigration policy and find a way to achieve a legal work status for the 12 million illegal immigrants in the .

It was a topic likely to come up again in talks on Wednesday between Bush and 's president, who delivered a blunt message on Tuesday, complaining directly about US plans to build a fence along part of the porous US-Mexican border.

As long as the is rich in capital and rich in labour, "migration might not be stopped, and certainly not by decree," Calderon said.

Calderon took over in December from Vicente Fox, who failed to get an immigration deal with Bush during his term.

Bush is pledging to push the Democratic-led US Congress to complete action on immigration this year with significant steps taken by August, before the campaign for the 2008 race to succeed him completely takes over.