America's supposed great experiment in "objective" journalism, which begun nearly a hundred years ago, is a history now, replaced with bias and injustice. "The trend toward secrecy is the greatest threat to democracy," Associated Press CEO, once said commenting on the need for openness. America's supposed great experiment in "objective" journalism, which begun nearly a hundred years ago, is over.

To call a news agency that hides information it obtains because it might tarnish a country, individual, or a government's image, is to make a mockery of clean journalism. Clean journalism means that reporters should present their audiences with information without taking sides, without hiding facts, and without twisting details.

But that's exactly what the Associated Press (AP), considered to be the world's oldest and largest news organization, did by erasing a video footage depicting the Israeli soldier crime of intentionally shooting a Palestinian boy.

The AP, a major determinant in what Americans read, hear and see, insists on conducting its activities in the dark, refusing to answer simplest questions regarding its system of international news reporting and why it decided to hide the footage of the brutal shooting of a Palestinian innocent child by an Israeli soldier, The Middle East Media Center revealed on its website.

While in the occupied Palestinian territories last year, Alison Weir, a former reporter, and now Executive Director of If Americans Knew, currently conducting a statistical analysis of AP's coverage of Israel-Palestine, accompanied by another collegue, his daughter, both were working on a documentary there, investigated one such omission. 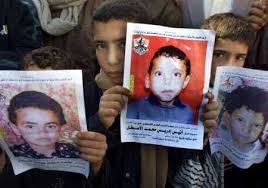 In October 2004, Israeli occupation forces invaded West Bank's poverty-stricken community, Balata; and despite the fact that there was no resistance to the raid from the Palestinian side, an Israeli soldier took his gun out of his armored vehicle, pointed it at a Palestinian boy and pulled the trigger.

While at hospital; interviewing the boy, Ahmad, who had bandages around his lower abdomen, where surgeons had operated on his bladder, Weir found another boy there, with a shattered femur; and a third one with a bullet hole in his lung.

He says he also saw a fourth boy, who was visiting another patient and showed him a scarred lip and missing teeth from when Israeli soldiers had shot him in the mouth.

The shocking part of the story is that Weir and his daughter found out that an AP cameraman had filmed the entire incident, sent his video to the AP control bureau for the region. This bureau is in Israel.

But the AP refused to broadcast the video, a documentary evidence of Israel's war crimes, or send it to the right authority to launch an investigation into this crime.

The Associated Press chose to erase the video, according to its cameraman.

The reporter went to the bureau Chief Steve Gutkin who told him that AP doesnt allow its journalists to give interviews and that all questions must go to Corporate Communications, located in New York, the United States.

This is only an example of the AP's biased coverage of Israel-Palestine conflict, which includes turning a blind eye to newsworthy stories, omitting or misreporting significant facts, as well as removing critical sentences from updated reports.

This is a disturbing finding, knowing that AP news is used by 1,700 newspapers, in addition to 5,000 television and radio outlets.

But Weir didn't get any reply from Stokes who promised he would look into this and get back to him.

Weir phoned him again. Stokes said that AP had determined that this was "an internal matter".

This is blatant violation of the fundamental journalistic norms of ethical behavior. According to the Statement of Principles of the American Society of Newspaper Editors, Journalism is a "sacred trust."

According to the Society of Professional Journalists, one of the four major pillars of journalistic ethics is to "Be Accountable." According to SPJ's Code of Ethics, "Journalists are accountable to their readers, listeners, viewers and each other.