The Nobel peace prize has been jointly awarded to the economist Muhammad Yunus and the bank he founded, which provides loans to the rural poor of Bangladesh. The Grameen bank and its creator were praised by the Nobel committee for their efforts to help "create economic and social development from below" in their home country by using innovative economic programmes such as micro-credit lending.

"Across cultures and civilisations, Yunus and Grameen Bank have shown that even the poorest of the poor can work to bring about their own development," the Nobel committee said in a statement.

"Lasting peace cannot be achieved unless large population groups find ways in which to break out of poverty. Micro-credit is one such means," the statement said.

Yunus himself told Norway's NRK public television that he was "delighted, really delighted".

"You are endorsing a dream to achieve a poverty-free world," he said.

The 65-year-old economist said he would use part of his share of the award money to create a company that would make low-cost, high-nutrition food for the poorand the rest would go toward setting up an eye hospital for the poor.

Yunus has drawn praise for giving loans to poor Bangladeshi women which help pull them out of poverty.

Grameen Bank, which was founded by Yunus in 1976, provides credit to "the poorest of the poor" in rural Bangladesh, without any collateral, according to its website. 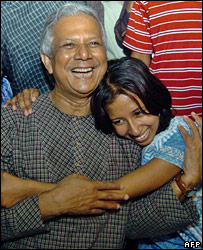 Loans average about $200 and go towards buying items such as cows to start a dairy, chickens for an egg business, or cell phones to start businesses where villagers who have no access to phones pay a small fee to make calls.

Grameen, which means rural in the Bengali language, says it encourages social responsibility. The results are hard to argue with - the bank says it has a 99 per cent repayment rate.

The Nobel prizes, an international award administered by the Nobel Foundation in Sweden, are awarded for achievements in physics, chemistry, physiology or medicine, economics, literature and for peace.