Despite numerous assurances by U.S. intelligence sources that Iran needs another 10 years before having nuclear weapons, media reports over the past couple of months all suggested that the U.S. is planning or actually finalizing plans to strike Iran. On top of those reports was Seymour Hersh's last month article on The New Yorker, in which he asserted that the U.S. government is planning to massively bomb Iran, as well as using nuclear bunker-busting bombs to destroy Iranian nuclear facilities and development sites.

An editorial published Saturday on Bloomberg's website suggested that Iran could be readying plans to respond to a possible U.S. strike targeting its nuclear installations by using its strong position in world's oil markets.

"They will not allow us to limit the conflict to `tit for tat' -- us hitting their nuclear facilities, and they restricted to hitting deployed American military,'' Michael Eisenstadt, an Iran expert at the Washington Institute for Near East Policy and a former Central Command analyst said in an interview. 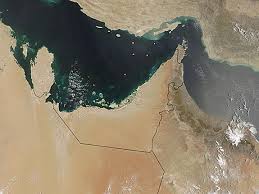 In case the U.S. decides to bomb Iran's nuclear facilities to force it suspend its nuclear program, Tehran might consider choking off oil shipments through the Strait of Hormuz, and thus trigger a market disruption that would force America to back off.

However the Iranians hope that current escalation over the Islamic republic's nuclear activities doesn't end up with nuclear confrontation, for the devastation such war could bring to both nations, the U.S., Iran, as well as neighbouring states.

It's noteworthy that about one-fifth of the world's oil consumption, 17 mln barrels, is shipped through the strait every day.

But using the oil rich country's influence over oil markets would be just a part of a broader retaliation plan that would also include attacks against U.S. military bases and interests in Iraq and worldwide, the analyst added.

In a written statement to the House Armed Services Committee on March 15, top U.S. commander in the Middle East, General John Abizaid warned against Iranian plans involving expanding naval bases along its shoreline.

President Bush has repetitively claimed that his administration prefers to solve the Iranian crisis using diplomacy, while on the other hand, he, and many officials at his government, warned that the military option could be used to forcefully stop Iran from pursuing nuclear technology, although it's a signatory of the Nuclear Non-proliferation Treaty.

According to intelligence sources cited by many news reports, the U.S. Department of Defense and the Central Intelligence Agency; the CIA, are examining the possible targets that would be hit in case of a military operation against Iran. Such targets would include the facility at Natanz and the facility for enriching uranium at Isfahan.

Earlier this month, John Bolton, the U.S. ambassador to the United Nations told Congress that what he called "diplomatic efforts" had so far been frustrated by Iran's "clout as the world's fourth-largest oil supplier."

"The Iranians have been very effective at deploying their oil and natural-gas resources to apply leverage against countries to protect themselves from precisely this kind of pressure, in the case of countries with large and growing energy demands like India, China and Japan,'' Bolton said.

Also Ali Larijani, Iran's top nuclear negotiator, was recently quoted as saying that Tehran could be provoked to cut its oil exports as a result of the mounting pressure over its nuclear activities.

Amid nagging concern that Iran, a key exporter, could cut oil supplies because of international pressure, oil prices rose by 17% over the past two months, reaching $72, which reflects the potential impact disruption of Iran's oil exports would have the next six to 18 months, said Jamal Qureshi, lead oil industry analyst for PFC Energy, a risk-analysis firm in Washington.

Even with that, a military conflict would shock the system so "you'd very likely get a quick spike that could very easily go to $100 a barrel,'' until the U.S. releases oil from its strategic reserve, Qureshi said in an interview.

"It could get messy real quick.''

Even if Iran can't block the strait, said Kenneth Katzman, a terrorism and Middle East analyst for the nonpartisan Congressional Research Service, it "can create a sense of crisis to drive up the price of oil, and presumably'' the nations that consume all that oil "would pressure the U.S. to stand down or shrink from confrontation or end it quickly'.'

These figures "tell me that Iran for the foreseeable future will have considerable 'petro-influence' over prospective U.S. allies,'' Kupchan added.

Last week, Iran's deputy oil minister, M. H. Nejad Hosseinian, was quoted as saying that crude oil prices, currently about 40 per cent higher than a year ago, are expected to hit $100 a barrel this winter as demand outpaces supply.

But prices are still about 20 per cent below the records reached in 1981, when supplies became tight after a revolution in Iran and a war between Iraq and Iran.