Police in southern India are investigating reports that poverty-stricken survivors of the Indian Ocean tsunami sold their kidneys because of the slow pace of rehabilitation after the disaster. Up to 150 people, mainly women around the coastal city of Chennai, in Tamil Nadu, are believed to have sold their organs for 50,000 rupees (£575) in the past few months.

The tsunami in 2004 wreaked havoc on the Indian coastline, killing thousands, destroying fishing fleets and leaving tens of thousands of people destitute. 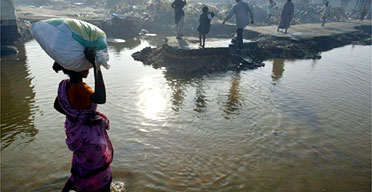 A villager returns to a fishermen's colony in Tamil Nadu that was hit by the tsunami. Photograph: Gurinder Osan/AP

The authorities first became aware of the kidney problem when a public meeting in Ernavur, a village built by poor tsunami survivors, heard complaints that some had been forced to sell their organs to raise money during the past two years.

"We were listening to people tell us that they had had their kidneys removed for money, because they were facing dire poverty," said Miloon Kothari of the UN human rights council, who chaired the public meeting. "It was shocking. Even worse, some of these operations had been carried out in government hospitals." Organ sales are prohibited in India, but donations by relatives are allowed.

Although doctors say people can lead a normal life with a single kidney, it is an area fraught with medical complications.

Chennai's police commissioner, Letika Saran, told reporters: "We have formed a special team which has started making preliminary inquiries with the women in Ernavur and will later spread our inquiries to other slums."

Revathi, 27, a mother of two, told the Guardian she "donated" her kidney for 50,000 rupees to pay off loans. She said poverty had also driven many women to prostitution.

Although aid agencies say that reconstruction has been relatively good around Chennai, the government has been slow to help the people of Ernavur. The camp, seven miles north of Chennai, has no schools, no hospitals and only enough shelters for 1,300 people, rather than the 2,000 it was meant to accommodate. Aid workers say the new settlement is more than a mile from the sea, which cuts off the fishing community from its livelihood.

An aid worker who spoke on condition of anonymity said: "The state government has disregarded this community because it is a marginalised one. It would prefer the coast was used to build hotels, but the result is desperate people."

Maria Selvam, the leader of the local fishermen's association in Ernavur, told local agencies that he knew of at least 25 women who had sold their kidneys for less than 50,000 rupees.