Syria and Iran have praised Hezbollah for what both describe as the group's defeat of Israel in Lebanon. Syrian leader Bashar al-Assad hailed the "glorious battle". Syrian leader Bashar al-Assad hailed the "glorious battle". Iran's Mahmoud Ahmadinejad said Hezbollah had thwarted US plans to dominate the Middle East. The comments came as the ceasefire between Israel and Hezbollah continued to hold, despite sporadic violence. Displaced Lebanese are returning home after the halt to the conflict, in which both sides claim to have won.

Both Syria and Iran are long-time allies of Hezbollah. Mr Assad, speaking in Damascus a day after the UN-brokered ceasefire took effect, was giving his first speech on the crisis since it began more than a month ago. He said Israel had been defeated and Hezbollah had "hoisted the banner of victory", following the month-long conflict. He added that peace in the Middle East was not possible with the Bush administration in power in Washington. "This is an administration that adopts the principle of pre-emptive war that is absolutely contradictory to the principle of peace," he said. "Consequently, we don't expect peace soon or in the foreseeable future." 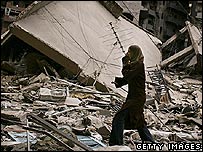 Displaced Lebanese are returning, but many homes no longer exist

The defiant speech is the clearest sign of how US opponents in the Middle East have been emboldened by the outcome of the conflict, says the BBC's Jon Leyne in Damascus. Mr Assad said there was no more need for defeatism among Arabs - a feeling echoed across the Arab world, our correspondent adds. In Iran, Mr Ahmadinejad said Hezbollah had foiled plans to forge a Middle East dominated by "the US, Britain and Zionists".

"God's promises have come true," he told a cheering crowd in the north-western city of Arbadil. "On one side, it's corrupt powers.... with modern bombs and planes. And on the other side is a group of pious youth relying on God." As Lebanese refugees continued to pour back to their homes on Tuesday, their government said it was ready to move forward with its part in securing the ceasefire. Defence Minister Elias Murr said that by the end of the week, the Lebanese army would deploy 15,000 troops on the boundaries of the southern Litani River, some 30km (18 miles) from the border with Israel.

In the meantime, international troops currently in Lebanon would assume positions vacated by the Israeli army before handing them over to the Lebanese. He said it was not the job of the Lebanese army to disarm Hezbollah fighters but he was confident they would withdraw from areas in southern Lebanon as the troops moved in. In Israel, army officers said they expected to start giving up captured Hezbollah positions in southern Lebanon within a day or two.

Overnight, Israeli troops left the southern Christian town of Marjayoun, Lebanese security sources said. Israel's army said Hezbollah militants fired several mortars southwards overnight but it did not respond as none landed over the border and no-one was injured. The army later shot five Hezbollah fighters in two incidents in south Lebanon, killing at least three. It said it acted in self-defence. French Foreign Minister Philippe Douste-Blazy is travelling to Lebanon to discuss the proposed deployment of an expanded United Nations force, in which France is expected to play a key role.

Meanwhile, the presidents of US and Iran have blamed each other for fuelling the crisis. US President George W Bush accused Iran of backing armed groups in Lebanon and Iraq "in the hope of stopping democracy from taking hold". Iran's president blamed Washington for providing Israel with weapons which he said had been used to target women and children in Lebanon.