Saddam Hussein, the former Iraqi president, has been hanged, Iraqi officials have said. The execution took place shortly before 6am (03:00 GMT) on Saturday at an Iraqi justice ministry facility in northern Baghdad. Iraq's former leader Saddam Hussein has been executed by hanging for crimes against humanity at a secure facility in a northern Baghdad suburb.

The execution took place shortly before 6am (03:00 GMT) on Saturday at an Iraqi justice ministry facility in northern Baghdad.
As guards took him to the scaffold, according to witnesses, Saddam said: "There is no God but God and Muhammad is his prophet."

Saddam was convicted of crimes against humanity of the killings of 148 Shia villagers after a failed assassination attempt in 1982. 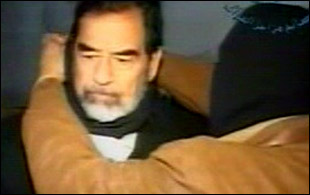 "I urged followers of the ousted regime to reconsider their stance as the door is still open to anyone who has no innocent blood on his hands, to help in rebuilding an Iraq for all Iraqis," he said.

In Sadr City, a Shia area of Baghdad, people danced in the streets while others fired guns in the air to celebrate the former leader's death.
Violence in Iraq continued on Saturday after Saddam's death and at least 30 people were killed when a bomb exploded in a fish market south of Baghdad in the first .
US satisfaction
George Bush said the execution was an important milestone on the country's path to democracy.
"Bringing Saddam Hussein to justice will not end the violence in Iraq, but it is an important milestone on Iraq's course to becoming a democracy that can govern, sustain, and defend itself," the US president said in a statement.
An appeals court had upheld the death penalty on Tuesday and the Iraqi government rushed through the procedures to hang Saddam by the end of the year and before the Eid al-Adha holiday that starts on Saturday.
Saddam's half-brother, Barzan al-Tikriti, and a former judge, Awad al-Bander, also sentenced to death for their roles in the killings of the villagers in Dujail, will be hanged after Eid, officials said on Saturday.
Hanging footage
The government had kept details of the execution plan secret amid concerns that it may provoke a violent backlash from Saddam's supporters with Iraq on the brink of civil war.
"It was very quick. He died right away," an official Iraqi witnesses told the Reuters news agency.
"We heard his neck snap," said Sami al-Askari, a political ally of al-Maliki.
Another witness said: "He seemed very calm. He did not tremble."
State television said that it would air footage of the hanging.
Criticism
During his three decades in power, Saddam was accused of widespread oppression of political opponents and genocide against Kurds in northern Iraq. His execution means that he will never face justice on those charges.
Saddam insisted during his trial that he was still the president of Iraq. He said in a letter written after his conviction that he offered himself as a "sacrifice".
"If my soul goes down this path [of martyrdom] it will face God in serenity," he wrote in the letter.
Saddam's defence team and human rights groups complained that the former Iraqi leader had not recieved a fair trial.
Najeeb Al-Nuaimi, one of the defence lawyers, told Al Jazeera: "There was bias, the prosecution sided with their politicians, it was an ethnically established court with three Shia and one Sunni."
The US-based rights group Human Rights Watch condemned the hanging, saying history would judge his trial and execution harshly.
Richard Dicker, a Human Rights Watch director, said: "Saddam Hussein was responsible for horrific, widespread human rights violations, but those acts, however brutal, cannot justify his execution, a cruel and inhuman punishment."