The rebels said the air strike took place in the rebel-controlled northern district of Mullaitivu. The government has denied the attack, saying the air force had targeted an LTTE training camp. Hours later, a bomb explosion in the capital Colombo killed seven people and injured 17 others. The Tamil Tigers' military spokesman, Irasaiah Ilanthirayan, told the BBC they were not responsible for the blast. There has been fierce fighting between government forces and Tamil Tigers in the north and east in recent days.

Military officials said the rebels had infiltrated the Jaffna peninsula and hit residential areas in their attacks on the army, and that the air force was attacking to support ground troops fighting rebel advances in the area. "It is a lie to say that schoolchildren were targeted," government spokesperson Chandrapala Liyanage told the AFP news agency. "The air force had bombed a LTTE training centre. We don't know if they had moved child soldiers there." 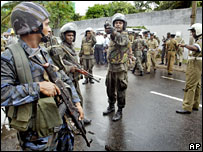 The Colombo blast hit a convoy of vehicles

The Tamil Tigers said the victims, who were aged between 15 and 18, were attending a first aid seminar. Thorfinnur Omarsson, spokesman for the Sri Lanka Monitoring Mission, told AFP it had received a complaint from the rebels and a team was on its way to investigate. Junko Mitano, of the United Nations children's agency Unicef, told the BBC it had confirmation children had been killed in Mullaitivu.

She declined to give further details, saying a statement would be issued on Tuesday. The government has also denied rebel accusations that its forces killed at least 15 people in an attack on a church in the predominantly Tamil village of Allaipiddy on an island just west of Jaffna.

In the Colombo blast, a powerful mine exploded near the official residence of President Mahinda Rajapakse as a convoy, including a Pakistani embassy vehicle, went past. The Pakistani ambassador, Bashir Wali Mohamed, was returning from a flag-raising ceremony for Pakistan's Independence Day when the explosion happened. He was not injured. Mr Mohamed told the BBC's Urdu Service he believed he was "surely the target".

He said he thought this was because of the Pakistani government's support of the Sri Lankan government in its war against terrorism. The Tigers have ruled out peace talks with the government while heavy fighting continues between the two sides. Aid agencies say a 100,000 people have been affected by the latest fighting - 60,000 people have fled their homes and 30,000 are trapped in the east.

Sri Lanka's northern Jaffna peninsula has seen more heavy shelling and artillery fire as government forces and the Tigers battle for control of key areas. The recent flare-up in fighting has alarmed Sri Lanka's key foreign donors - the US, Japan, the European Union and Norway - who have called for an immediate end to the hostilities, which they said was "seriously unravelling" the 2002 ceasefire agreement. The ceasefire aimed to halt more than two decades of war between the government and the rebels, who are fighting for an independent homeland for the country's minority Tamil people in the north and east.