Talks on Kosovo Future Under Way

Long-awaited talks aimed at deciding the future status of Kosovo have begun in the Austrian capital, Vienna. The province is still legally part of Serbia and Montenegro - but it has been under UN protection since Nato air strikes forced Serb troops out in Kosovo Albanians, who make up the majority of the population, want full independence but Serbia is concerned about the province's Serb minority. UN-appointed mediators say any deal must reflect what the majority wants. This is the first face-to-face meeting between the Serbs and Kosovo Albanians since last year, when the UN Security Council appointed a special mediator to reach a settlement.

Negotiations were delayed by a month, following the death of Kosovo President Ibrahim Rugova in January. Talks will initially focus on the Serb minority, which makes up 5% of the population. Many live in enclaves protected by Nato peacekeepers since the 1999 war.

Kosovo Serbs want to remain part of Serbia and Montenegro. Serbs also have a deep cultural and historical link to Kosovo. The six-nation Contact Group - Britain, France, Germany, Italy, Russia and the US - which is overseeing the negotiations, has called for a settlement to be reached this year.

Serbs and Albanians are meeting in Vienna for talks on the future of Kosovo. Part of Serbia and Montenegro, the province has been under international administration since 1999, when Nato air strikes drove out Serb forces. Matt Prodger explains why Serbia is so strongly opposed to independence. 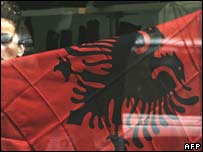 Mediators will push for a settlement to be reached this year

Safely stored away in the basement of one of Belgrade's museums is one of the country's most prized paintings. It is called the Kosovo Maiden and was painted by Uros Predic in 1919. It depicts a fallen Serb soldier being tended to by a girl on a blood-drenched battlefield. The Battle of Kosovo, in 1389, is part of the Serb psyche - a defeat which led to five centuries of Turkish occupation.

Since then, Kosovo has grown in significance to almost mythical proportions - it is regarded as the cradle of the nation, the birthplace of the Serbian Orthodox Church, the source of Serbs' cultural identity.  And the idea of this so-called "sacred land'' being separated from Serbia is to Serbs, simply unacceptable.

Predrag Markovic is a historian with a passion for the unique blend of western and eastern heritage that has long been a feature of the landscape of Kosovo. In Belgrade's Gallery of Frescoes he shows me the reproductions of Christian religious icons from the province.

Many of the originals were destroyed by ethnic Albanian rioters during a violent upheaval in 2004. "It is said that Kosovo is Serbia's Jerusalem, the cradle of our culture and civilisation," he says. "It seems that one part of our history is going to disappear forever.''

The issue of Kosovo began the Yugoslav wars of the 1990s, Mr Markovic contends. "The rise of Albanian nationalism there in the early 1980s was met several years later with the Serb nationalism which Slobodan Milosevic exploited in Croatia and Bosnia.

"Now, with Kosovo the final unresolved conflict, it's come full circle.'' In June 1989 - on the 600th anniversary of the Battle of Kosovo - Slobodan Milosevic consolidated his position as "saviour of the Serbs'' when he spoke to a mass rally on the very same battlefield.

The rest is history.

Today, on the streets of Belgrade, graffiti has appeared which appears all too familiar: "Better war than occupation - we will never surrender Kosovo,'' reads one slogan. But Serbs are war-weary. Besides, the country's military and police have been massively diminished since the Nato bombings of 1999.

Instead, Serbia's leaders will use the coming negotiations to try to regain some control in Kosovo, with a hopeful offer of autonomy, not independence, for the province. And if it comes to independence, they want at least self-government for the enclaves where many Kosovo Serbs - who make up little more than 5% of the population - live.

There are also suggestions in Serbia of partitioning Kosovo, with parts of it remaining in Serbia. Sanda Raskovic-Ivic, the Serbian government's co-ordinator for Kosovo, is part of the negotiating team. "Nobody in Serbia expected independence after 1999,'' she says.

"We expected that the international community would bring peace and stability to the region, would help Albanians to take their own future in their own hands but within our state, within Serbia.'' Western diplomats scoff at such statements, and say that Serbia's leaders should be doing more to prepare their people for the inevitable.

It is not just the territory of Kosovo which is preoccupying Serbia. Montenegro, which has been in an uneasy union with Serbia since the final dissolution of Yugoslavia three years ago, is preparing to hold a referendum this year which could also see it declare independence.

At the headquarters of Serbia's powerful nationalists, they know that such tensions are increasing their popularity by the day. "I wouldn't even accept Montenegro's independence, let alone Kosovo's,'' says Tomislav Nikolic, leader of the Serbian Radical party, which although in opposition, is the single most popular political party in Serbia.

"If Kosovo gets independence why would we co-operate with someone who has stolen our territory?'' he says. "Kosovo would have to be declared occupied land.'' In Belgrade's bookshops, you can buy glossy coffee table books which celebrate the history and culture of Serbia.

Within them, photographs of scenes from Kosovo as Serbs see it. Orthodox monasteries, monks at prayer, beautiful frescoes, and rosy-cheeked peasants harvesting the fields. Page after page of them. Even as the province itself prepares to turn over a new leaf.