The Sri Lankan air force says it has destroyed the headquarters of the Tamil Tiger rebels' sea force. An air force spokesman said the attack took place in the north-eastern district of Mullaitivu. The Tigers say they hit a civilian charity building.

"We now understand that the base was the headquarters of the Sea Tigers," Cap Ajantha Silva told the Associated Press news agency.

On Monday the army said it had overrun four rebel bases in eastern Sri Lanka.

The headquarters of the Sea Tigers was still burning an hour after the attack, Cap Silva says.

He said fighter jets had bombed the complex several kilometres inland in the northern district of Mullaitivu.

It included a fuel storage area and an ammunition dump, according to the spokesman.

He said there were no details of casualties on the ground. The Sri Lankan Defence Ministry website described the target as "a Sea Tiger base complex".

It said: "According to the air force sources, a large Sea Tiger base consisting of fuel storages, a vehicle park and several suicide boats were completely destroyed in the attack and were seen in flames by the pilots."

However, the Tigers insist that what was hit was the building of a charity that makes artificial limbs for landmine victims.

The pro-Tamil Tiger website, Tamilnet, said two nearby civilians were killed in the attack.

In recent months, they have taken part in several pitched battles with the Sri Lankan navy.

There has been heavy fighting in Sri Lanka as the government continues its attempts to drive the rebels from eastern areas of the island.

Last week the rebels launched their first air raid, bombing the airbase adjacent to the international civilian airport near the capital, Colombo. 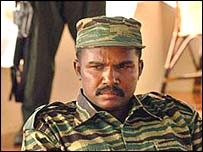 The army said 23 Tigers were killed in a clash in the eastern district of Batticaloa that began late on Monday.

On the same day a bomb exploded on a civilian bus, also in the east, killing 16 people.

The leader of a key Tamil Tiger breakaway group in eastern Sri Lanka has said that the main organisation's head was never serious about the peace process.

Col Karuna Amman told the BBC that Velupillai Prabhakaran had said peace talks should be dragged out so the rebels could prepare for more fighting.

Col Karuna left the rebels in 2004, seriously weakening them.

Government forces are now taking control of much of the Eastern province in renewed fighting.