Being Muslim and Korean

This is a combination that suprises many. When my airplane finally landed in Incheon at worlds most advanced airport, I felt very excited. Not only was it the first time for me as a German citizen to travel that far, I also knew that this journey is something special — a Muslim spending five weeks in South Korea, a country that is home to the largest Pentecostal church and with about 46% of the population having no religious affiliation according to the American Pew Research Center. 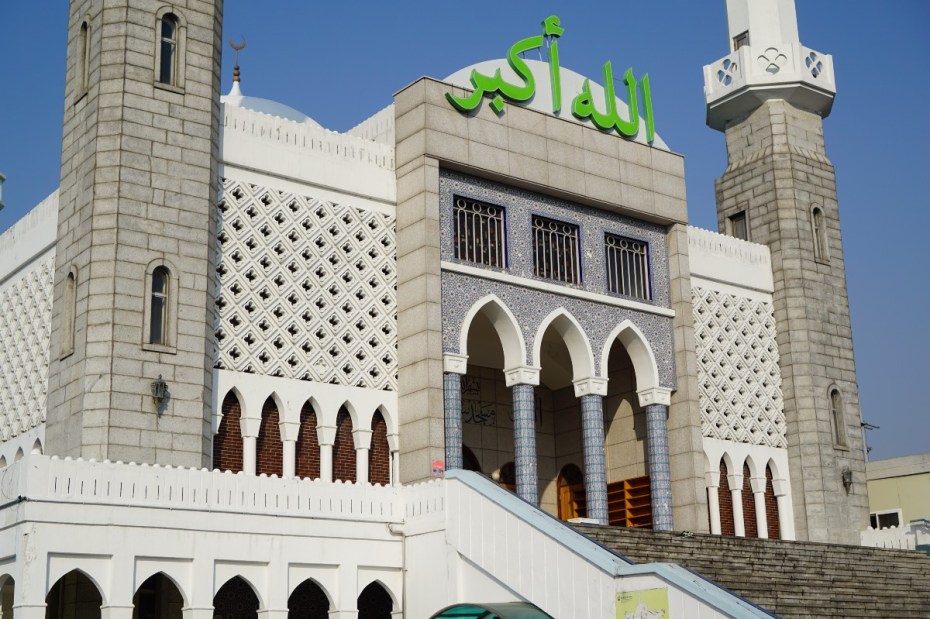 The fact that Muslims account for only a tiny minority in the southern Korean peninsula didn’t stop me from learning as much as I can about the culture and country itself. Ever since my ears came to hear the Korean language and my eyes could recognize Hangul, the Korean writing system, I knew that I wanted to be able to speak the language. And while I consider myself still to be a beginner in the language the feeling that a woman dressed in Hanbok gave me when I asked her in Korean how to take the train from Incheon International Airport to Seoul, and she actually understood me, deeply touched my heart. It was as touching for me as the following subway ride from Seoul Station to Itaewon where an older Korean man with his three friends suddenly came to help me search for my guesthouse in the very late night.

Itaewon — a Slice of Muslim Life in the Heart of Seoul

Itaewon can be seen as the home of the roughly 150.000 Muslims that are estimated to be living in Seoul with almost one third of them being ethnic Koreans. It is a popular district in the capital city among Koreans in their twenties and it’s where the Seoul Central Mosque is located — Koreas first mosque that opened in 1976. Itaewon is also home to many halal restaurants and shops including Eid Halal Restaurant a Korean restaurant that is run by a lovely Korean Muslim family. 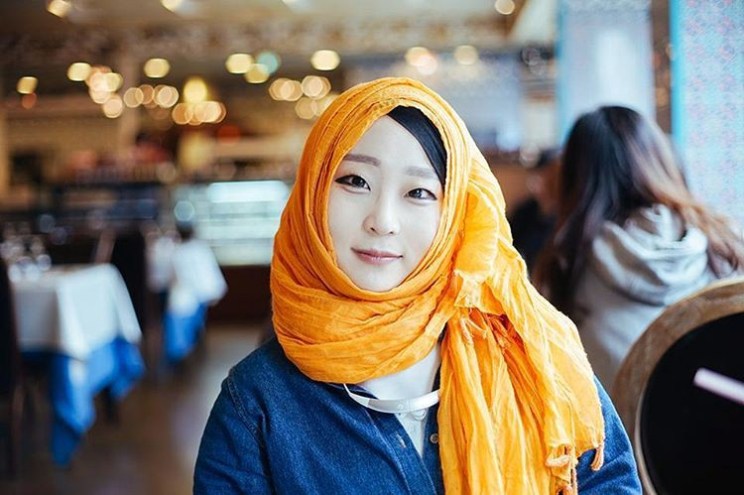 Today Seoul Central Mosque is one of the 15 mosques in Korea, apart from the 60 prayer rooms you can find at the airport, in universities and big shopping malls. The mosque serves as a hub to connect for Muslims and non-Muslims as well. Bora Song a Korean Muslima who is an Arabic teacher also answers non-Muslims their questions about Islam. My encounter with her in the mosque lasted only a few minutes when I was looking for a meeting with Korean Muslims in the conference room. But it was the first time for me to realize how independent Islam is from any culture. She was Muslim yet Korean. A combination that many non-Koreans and Koreans may surprise at first but for me ever made sense since I first saw Hanbok — the traditional clothing in Korea. 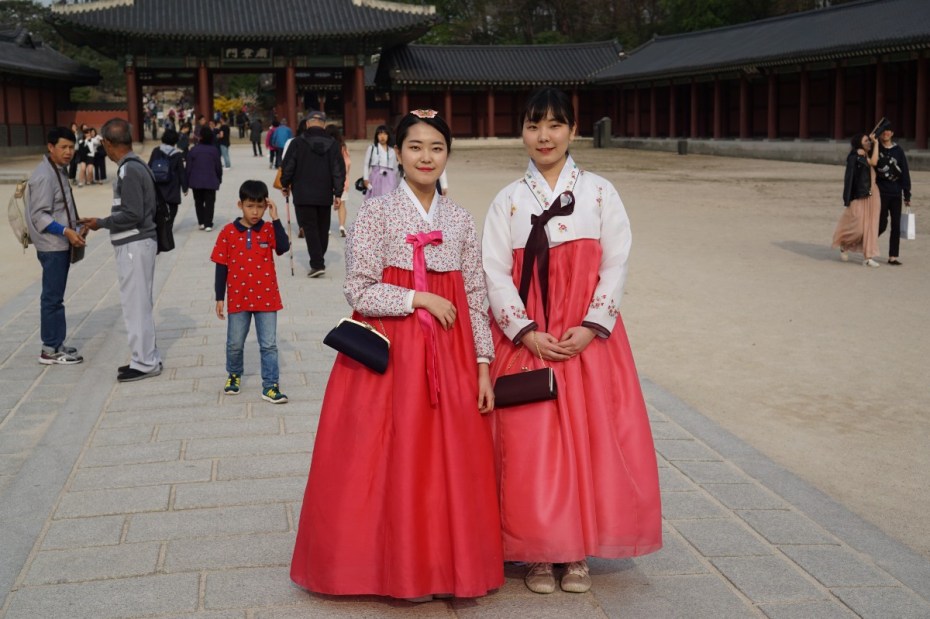 A young Korean woman recently said on Korean television, when she puts on her Hanbok it’s an honor for her and she feels like she has to act noble and gracefully and protect her family and herself. It is a modest way of dressing and it’s what Islam encourages you to do. Korean women even used to cover their head with a piece of cloth called Jang-ot (장옷) for the very same reason many Muslimas decide to put on hijab in public. And while Hanbok nowadays has been replaced with more modern and western clothing it has been gaining increasing popularity among both tourists and Koreans in the recent years. In fact, renting Hanbok and visiting one of the palaces with your Korean friends such as Gyeong-buk-gung (경복궁) or Chang-deok-gung (창덕궁) has become one of the top things to do when traveling to Korea. Many places even give you free entrance when you enter dressed in Hanbok. Today Korean fashion designers are trying to bring back this traditional piece of cloth by modernizing it and making it more affordable.

Bridging the Gap Between Korean Culture and Islam

Korean Muslims are rapidly changing the way people perceive Islam in a time where the religion is often portrayed as dangerous and associated with terrorism in mainstream media. One of my favorite artists Muna Hyunmin Bae who too is a Korean Muslima and currently resides in the United Arabic Emirates uses her artistic skills to show us how close Islam and Korean traditions can be. 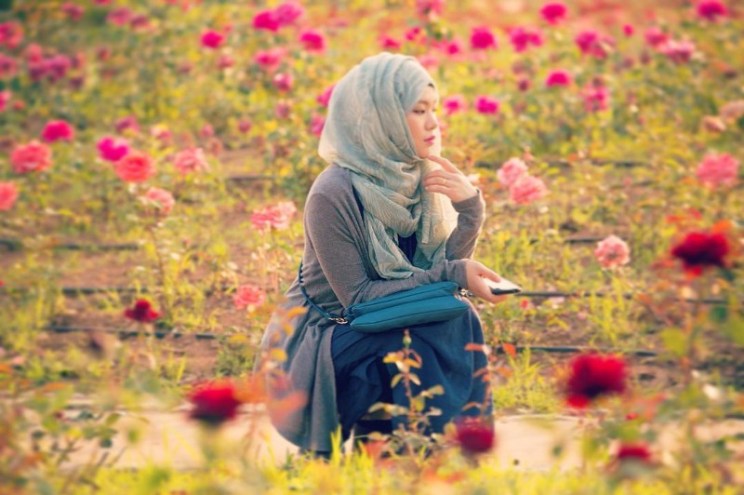 “It’s a very interesting process to discover the similarities between my roots and Islam”, she tells me. For her it is a constant search after her identity. At first she felt isolated when she converted to Islam. “But when I studied more about the Sunnah and Hadiths I sometimes found habits in Islam that also my mother taught me, which in turn she learnt from her own parents.”, she explained. These connections and similarities are exactly what she is trying to convey through her drawings, many of them showing Korean women wearing their traditional Hanbok clothing.

“Sometimes I get negative feedback from people in Korea about my concepts”, she goes on. Islam is still a very young religion in Korea after all. “Therefor, I am always looking for more resources that draw connections between the far east and middle east.” She sometimes even finds historical evidence that Korean culture and Islam can go along together. Her progress can be followed on her website and on Instagram.