Do You Know The Cham Muslims of Vietnam?

There are many Muslims over the world but very little known is about the minority Muslims of Vietname. Simone Doenvang, a Dutch convert to Islam has travelled to Asia and has related her experiences with Mvslim While traveling in the Mekong Delta region of Vietnam, I was surprised to find Muslims in an isolated village near the Cambodian border on the Mekong River Bank. Arriving by a small boat, the group I was traveling with got off on a narrow, half rotten, wooden bridge one by one. Following the group, we were met by barefoot children who were trying to sell us snacks and followed us into the village.

A group of men were sitting nearby wearing “Batik Lungi”, long shirts with a knot in their waist and white skull caps. They were all discussing something with an elder in white robes and turban.

The houses were built on 2 to 3 meter wood or concrete stilts to prevent flooding from the Mekong River entering the houses. Beneath one of them at the entrance of the village, waved fabrics were setup for display, while hijab wearing women were demonstrating the waving techniques of the Cham people and showing off their tribe patterns. 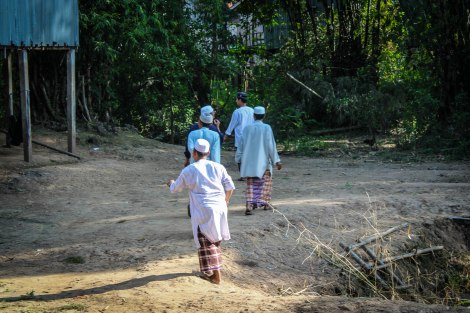 From the 2nd to the 17th century, the lands of South Vietnam belonged to the Cham Kingdom, ethnical decent from the Malay Polynesians. The prosperity in the Kingdom primarily came from maritime slave and sandalwood trades, which might have affected the beginning of the Islamic conversion that started all the way back in the 11th century. Officially the Cham King converted in the 17th century and spread the Islamic teachings to his people in the southern regions, before the Vietnamese dynasty conquered the land in the same century. The invasion and defeat might explain why Islamic teaching didn’t reach the Cham people in the more centralized regions of Vietnam, which today predominantly are Hindu or Buddhist. After the invasion of the South, most Cham Muslims fled to Cambodia and landed in what is called “Kampong Cham” literally translated to “Port of the Cham”, or to Terengganu in Malaysia. Fragments remained near the Mekong River in Vietnam.

From the ground entrance near the river bank, the tour guide led us up a staircase to join the wooden gangways that joined most of the stilt houses together. Every wood board would squeak as you walked from gangway to gangway, and as you passed the doorways into the sheds a woman or a child would occasionally peek outside to have a look at the foreigners visiting their village.

The villages in the area are functioning with somewhere in between three to four hundred citizens. Most men in the village are either fishermen, or works at the nearby fish farms on the Mekong River.   The women are mostly working within the community with producing unique Cham patterned fabrics, or simply work as vendors at the local market. As many other minorities in Vietnam, the Cham Muslims are economically depressed, and when they join workforces they are kept in low-income jobs. The women are socially forced to remove their hijabs in order to avoid discrimination, and the isolation of their community itself challenges their practice of belief when they need to work outside of the community. 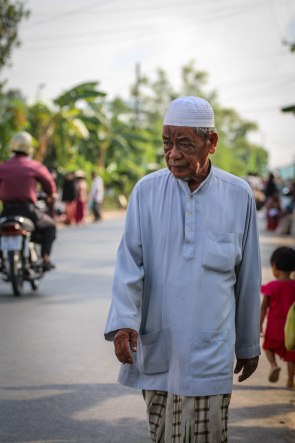 The group entered the asphalted main road from the village, and just across the street, a newly renovated Masjid and accompanying Madrassa, stood clean and bright in the reflections of the morning sun. In order to maintain and rebuild the masjids, the Cham Muslims are heavily depending on support from the outside. Most contributions come from Malaysia and Indonesia, and it is also there scholars in Vietnam get their teachings and degrees. Copying and distributing the Holy Quran and Islamic Scriptures are unofficially prohibited in Vietnam, and has from time to time resulted in merges between Buddhist rituals and Islamic teachings.

The Muslim population in Vietnam is estimated to be around 65.000 citizens, where the majority are the Cham Muslims. The second largest group are ethnical Vietnamese converts, and though Islam is slowly rising in the country, the Cham Muslims feel disconnected with the ethnical Vietnamese, as fragments of resentment between the once ruler and then conquer is still felt on both sides.