Over 200 suspects linked to Daesh terrorist group were arrested in Turkey in the month of December, as the country continues its fight against the terror group.

According to data compiled by Anadolu Agency, 13 of 251 arrested suspected Daesh members, including foreign nationals, were remanded in custody while some of them were deported.

Twenty-one suspects, including foreign nationals, were arrested in simultaneous operations in the capital Ankara, Istanbul, Amasya, Hatay and Kayseri.

In Istanbul, a senior Daesh member, identified as Naim T., was arrested with a fake Syrian identity card in his possession.

He was revealed to have fought in conflict zones in Syria and sent to Istanbul. He had been warranted in Turkey since 2015.

Moreover, eleven of 19 suspects -- who had been arrested in police raids in Sanliurfa, Amasya, Zonguldak, Kayseri, Konya, Tokat, Corum, Duzce and Samsun -- were remanded in custody.

Aysenur Inci, a terrorist on Interior Ministry's wanted list, surrendered to security forces on Dec. 15 at the Habur border gate on the Turkey-Iraq border.

Inci had been involved in terrorist activities as a Daesh member in Turkey's southeastern Adiyaman province before she went to Syria to join the terror group's activities there.

In addition, a total of 147 suspects were arrested in simultaneous operations in Ankara, Izmir, Samsun and Kayseri and many digital materials were seized during the operations.

Ten more suspects were arrested in Izmir in operations conducted ahead of New Year. 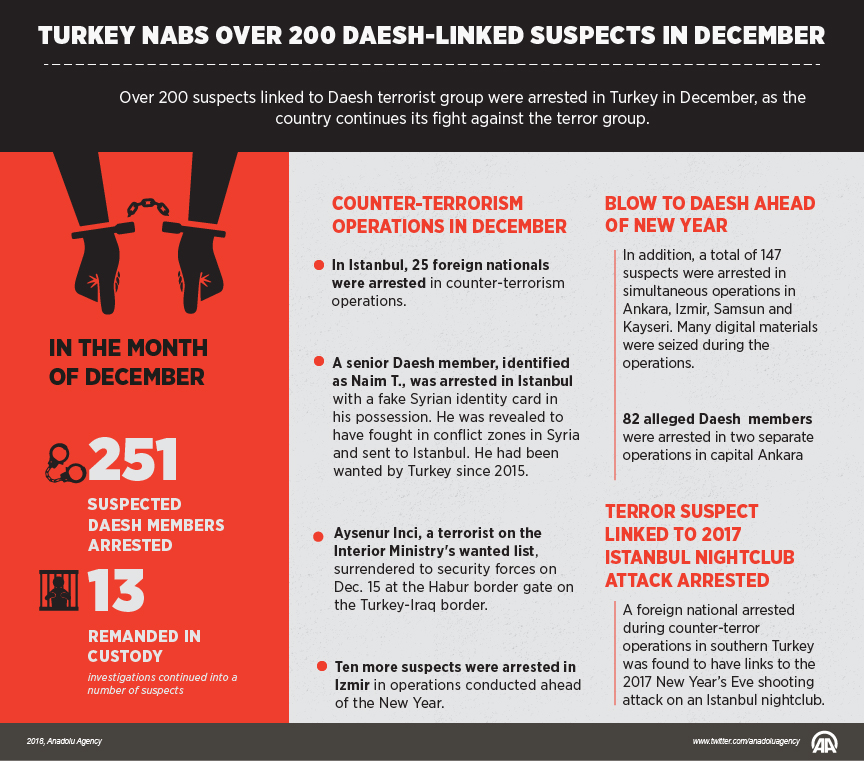 A foreign national arrested during counter-terror operations in southern Turkey was found to have links to the 2017 New Year’s Eve gun attack on an Istanbul nightclub.

In a statement, Chief Public Prosecutors' Office in Adana said the fingerprints of the Russian citizen of Chechen origin, identified by the initials A.G., matched those found in the house the nightclub attacker stayed.

The suspect was arrested in Adana's Seyhan district with a fake Syrian identity card in his possession.

The fingerprint searches revealed that one of the fingerprints found in the house in Istanbul's Basaksehir district, where Abdulgadir Masharipov, the perpetrator of a deadly New Year's Eve attack in 2017 stayed, belonged to A.G.

"The suspect is thought to have come to Turkey to carry out the terror act on New Year's," the statement said.

At least 39 people, including a police officer, were killed and 79 others injured when a gunman opened fire on partygoers at the nightclub in Istanbul’s Ortakoy district in the early hours of Jan. 1, 2017.

On Jan. 16, 2018, Masharipov was captured by police in Istanbul's Esenyurt district.

Investigations revealed A.G. had fought on behalf of the Al-Qaeda terror group in 2011 in Chechnya and came to Turkey in 2013 after being sought with an arrest warrant in his country.

After staying in Turkey for a year, A.G. went to Syria to fight for Al-Qaeda and returned to Turkey after a while, the statement said.

"The investigations on the digital materials seized, [reveals] the suspect A.G. had photos with arms and a number of explosive devices used during terror acts carried out on behalf of terror groups in Chechnya and Syria,” it added.