Countries who were testing platforms for interventionist US policies have suffered tremendously, says Pakistan's president In a rare move, Pakistan's president took to Twitter to publicly question the U.S. military interventions in such countries as Syria, Iraq, and Afghanistan.

"The countries who were the testing platforms for such policies have suffered tremendously. After this admission the next step obviously could be humanitarian reparations for the damage and suffering caused by these wars," Alvi tweeted. 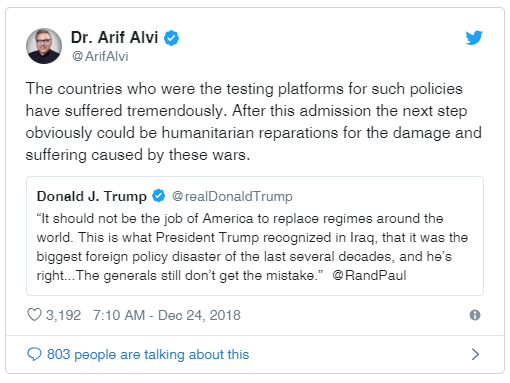 Alvi was responding to a Trump tweet quoting Rand Paul, a Republican senator wary of U.S. interventions, saying: “It should not be the job of America to replace regimes around the world. This is what President Trump recognized in Iraq, that it was the biggest foreign policy disaster of the last several decades, and he’s right...The generals still don’t get the mistake.”

Following his withdrawal decision last week, Trump lauded the presence of Turkish troops in the region ordered there by President Recep Tayyip Erdogan.

"President @RT_Erdogan of Turkey has very strongly informed me that he will eradicate whatever is left of ISIS [Daesh] in Syria .... and he is a man who can do it plus, Turkey is right ‘next door.’ Our troops are coming home!" Trump tweeted.

The White House has also reportedly ordered half of its troops in Afghanistan, Pakistan’s neighbor, to come home.

Relations between Pakistan and the U.S., allies in the so-called war on terror, have plummeted in recent years, mainly over Afghanistan.

However, some recent developments, mainly Islamabad's help in bringing the Taliban to negotiations over Afghanistan, have slightly eased diplomatic tensions between the two countries.